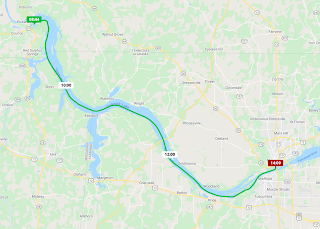 Have I got news for you.
Ida update #1: Ida went over us last night. We'd set out a bucket prior to act as a rain gauge. We had some wind wake us around 1:30 am when a cabinet on the stern had doors slam open. But otherwise no incident. The rainfall collected was about 3-4 inches. It was steady all night, heavy at times, but not the torrents we were expecting. Winds were sustained between 5-10 mph, with a single gust around 25. All good news.
Ida update #2: For those of you who do not know we have a condo in NOLA. I'm happy to report we still do! The property manage was in yesterday and said no windows were broken and no water intrusion. The roof still needs to be investigated, and we know some of the condos have issues since some HVAC units blew free (thankfully, none fell off the roof, which is astounding). We don't know if ours did. As for the city, it's in a bad state. A major tower that held the power lines for 5 NOLA boroughs fell. FIVE! Apparently the word "redundancy" doesn't exist in Entergy's lexicon. Anyway, current assessments are no power in NOLA for 6 weeks. Yikes!
The weather was gray and cloudy but not windy nor very rainy so we decided to go to Florence. We had reservations there for tomorrow and Thursday, but packages we'd sent had already arrived. It's not too far, so we moved on.
Watch the skies...
Fellow boaters know that periodically the Coast Guard makes announcement about conditions on 22A
We always listen but given Ida we were quick to change the channel. These aren't the clearest announcements (sadly, radio is not stereo quality) but we picked up a mile marker and the words "lock closed." Um... what lock again? Checking maps we confirmed Wilson Lock. And its the one we have to go through right after leaving Florence. It doesn't impact today's plans, but in a couple...
Russ called the Coast Guard on the phone. They said a long wall had collapsed. As the day unfolded we discovered that a floating long wall, well, doesn't float anymore. We don't know if Ida had anything to do with it but it sank and is covered by 75 feet of water. This is one of the walls commercial tows would tie up against while waiting for the lock to turn.
Wilson lock has 2 chambers, but only used the big one. We were told the small chamber took "too much man power."
Luckily we planned on staying here a couple of nights. Hopefully we'll get word if the lock will open anytime soon. This might put the kybosh on the whole trip because, frankly, there is no other way to go up the river.
Posted by Jax Robertson at 8:59 PM