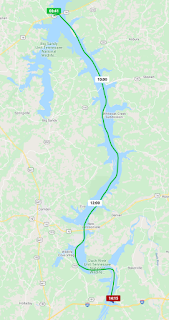 This was the third time we've been on this section of waterway, the first in 2019 on the loop, then about 2 months ago on our way to the Ohio. There are not many marinas. The typical thing is Green Turtle Bay to Pebble Island to Clifton to Aqua. Chasing 80 (fellow loopers) mentioned they stop at Cuba Landing instead of Pebble Island -- PI is a little close to Green Turtle Bay so Cuba Landing smoothes out the timetable a bit.

Since we'd never been, we thought we'd check it out.

We left around 8:30, after Russ took a sticky run. While underway he finished making yogurt (a regular task these days) and I did some laundry. While behind the wheel we kept one eye on the water, still dodging the occasional log, and one eye in the sky. The clouds built all day. Thunderstorms were predicted for later, but with this heat and humidity you just don't know. We did get a smattering of rain but nothing else.

Cuba Landing had been damaged by storms a couple of years ago (probably why we hadn't heard of it then). They'd been working to bring it back. We got put into another covered slip, which we don't mind given the sun is a major source of heat for us.

They told us the slip was 18 wide. I docked her stern in while Russ guided me as I backed in. He'd already taken the antennae and radar mount down, not knowing the height of the slip. We got this down to a science now.

It wasn't until we were about half way in that Russ said, "No, this is a 17 foot wide." Once docked and secured he concluded 17' 4". Not the smallest we've docked in (Gulfport wins that on with 16' 6") but still noteworthy. I got her in just fine but I kept one eye on our washer/dryer vent which just squeaked past the roof supports by a hair.

Every now and again we have these no drama victories. Feels good!

Passed the island on the left, turn left,
wander around the marina, spin and in!

Posted by Jax Robertson at 4:28 PM