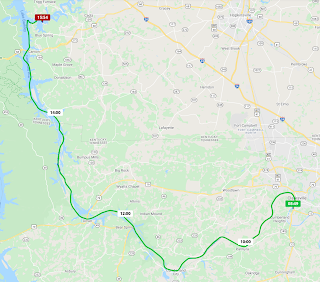 The last time we were on Little River we were at anchor. This time we're at the Lake Barkley Marina. Largely out of frustration.

We planned on anchoring tonight. We tried to get into 2 anchorages but, due to depths (lack of them) we couldn't do it. On our second attempt a local happened to be fishing nearby. He mentioned that the lake is down over a foot. Looks like more than that to us judging by the banks and tree lines.

Lake Barkley is a flooded river bed, as I mentioned before. The surrounding areas weren't hilly but rather low-lying areas with pocket-ponds here and there. As a result you're floating over the land that separated the original river from those ponds. If the lake is lower, just not much clearance. Moreover, if we could get in and they further lower the lake, we wouldn't get out.

In checking the weather it looked like more storms were likely, too. And I'm grouchy today. Thus the marina.

I do want to say that we remain really impressed with the Clarksville marina. The docks are nice and solid, everything is clean, it's surrounded by a nice park area, and has a wonderful walking path to some eateries. This time we chose Mexican. It was weird (they served us our tortillas with french fries) but quite tasty.

In the plus column of the day, we're officially out of the "cone zone" for Fred. And we're north, in Kentucky. Hopefully that means a little cooler for a while.

Posted by Jax Robertson at 7:57 PM