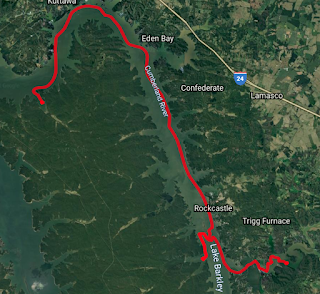 This was a short day yet one full of indecision and exploration.

First a quick history: Both Lake Barkley and Kentucky Lakes are man-made. That is, they built dams that flooded the area, including old roads and bridges and creeks. There will be a test later.

We left the anchorage after dawdling a bit -- made lattes, walked the dog, ate some breakfast -- and got underway heading up river. The weather is simply amazing, so we wanted to anchor out. But it seemed that marked anchorages, that is, place people have successfully anchored, dwindled as we head toward the top of the Lake Barkley (which is the bottom... rivers are complicated). But there are sooooo many little coves and bays that we were confident we'd find something.

Russ set our destination to a town up the river. As we traveled, we thought we'd keep an eye out for a place to stay for the night. It occurred to us that we would like to anchor out on the west side of the lake, which is closer to the Land Between the Lakes. That's a big park area. No houses are there, just boating and camping. But the main channel was on the east side. There was a channel along the west side, but we had to pick a path to it.

In the video you see us do just that. We meander to the right, then down river, then back up, all following a tiny channel that follows an old creek bed. It leads us to a bay, where we think we'll drop the hook.

However, there is a somewhat visible not-quite-submerged bridge (I wished I'd taken a picture because it doesn't read well in the movie) that I wanted to steer clear of. Next thing we know (right around the :12 mark) a flume of mud comes out from under the boat. We had 3 feet beneath the keel.

We turn around and bag this plan, wander our way back to the main channel following the bread crumbs various tracking apps left for us, and rejoin the main channel. We only go another couple of miles when there's another bay that has a popular marina, Lake Barkley State Resort Park. Beyond it was an anchorage. Getting there, however, was a similar effort. We followed a narrow channel that followed an old creek bed, and takes us right through the marina. I felt a little bad about that but there were islands in the way. So... marina.

We wound and twisted our way back, passing a handy dinghy dock, and drop the hook.

That accomplished we had a wonderful lunch, and napped, and tender ride with a pug. Heck, we even have a network.

The full event, in 51 seconds.

By the way, Goat Island is off Little River. And I have the song "Cool Change" stuck in my head, now.
Tiiiiiiime foooooooor a coooooool chaaaaaange....
Posted by Jax Robertson at 4:44 PM