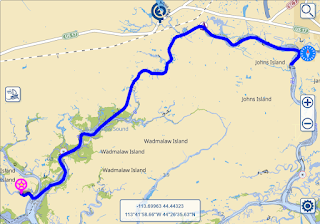 Not actually Charleston, just shy of it though.

The voyage here would be short so we weren't in a hurry to leave the anchorage. It was one of the quietest anchorages we'd been in for a long while. The morning was calm and gorgeous.

We weighed anchor around 8:30 in the morning and headed to St. John's Yacht Harbor, near Charleston. Russ made reservations for us about 2 days ago and he understood they were going to put us on a T-head. Tides here are a thing, so if we were going into a slip, we'd want to time that with slack tide, or close to it. Knowing we were on a T-head, however, meant it really didn't matter.

I talk about T-heads a lot. Here's a bird-s eye view of
the current marina. The end of each dock makes
a T. That's the T-head. You can see where we are.
We called them just to confirm our reservation. Which they seemed to have lost. "No worries, we can put you in a slip." Russ got information about the size, it's location, how we'd tie in, and somewhere in that someone said it was 16.5 feet wide. We're 16, and a true 16. Not an inch less. After some negotiation and investigation the marina did have space on a T-head for us. As a result, getting inQuest docked was trivial. For a few moments we were thinking of dropping anchor again and waiting for the next slack tides.

Martha and John Babinski came down to visit us before they headed south to go survey a boat they hope to purchase by the end of this month. We hope it all goes well -- we miss them!

Posted by Jax Robertson at 6:03 PM