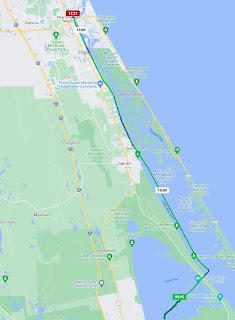 Titusville had some big storm pass by last night which not only kept us from seeing friends but bounced us pretty well. We spent the night on a mooring ball, and this is maybe the 5th time we've used one. Gotta say, not fans. Neither of us think it would have been as bouncy if we were on anchor. The storm lasted a couple of hours. Not so much lightning, but lots and lots of wind. We had sustained winds around 25 mph with gusts in the 50s.
On the mooring ball in Titusville a storm came through.
The white thing bobbing in front is the ball we're tied to.

Still a bit breezy in the morning we got off the ball quickly (which is the one plus balls have over anchors -- it can take a bit to get the anchor home). To get to New Smyrna we travel north up the Indian River which widens. Then you cross through Haulover Cut to get to the north side of the river. I saw a number of manatees there, so the observation deck to watch them is well placed.

As the day cleared off the winds remained stiff. Reservations for the New Smyrna Beach City Marina awaited. Docking today was the first real effort since Longboat Key.

We were given a slip number, which was fairly useless since you couldn't see them from the marina's fairway. The dockmaster told us when we turned in we'd see the open slip straight ahead. It was 19 feet wide with a 48 foot long finger pier, so bowing in (an easier maneuver in the wind) would be fine. We made the turn and saw, against the wall of the marina, the only open slip. Slowly we headed for it while Russ was trying to hail the marina on the radio. It didn't look 19 wide to me, and Russ pointed out it certainly didn't have a 48 foot long finger pier. Over the radio came "inQuest, do a 180." I do, battling a bit of wind and current, then head back to the channel. Now the dockmaster is out, pointing to a slip. It's huge, and wide open. How did we miss this?

I did another 180, again sliding from wind and current, then got her nose in. Lines on, engines off, the dockmaster then told us there was a boat in the slip that was supposed to leave 30 minutes earlier, which is why we didn't see it as an option. Russ made a fancy vid to show this, below.

Someday, when I grow up, I'll be a useful and informative dockmaster.

Given the instructions "Once you turn into the marina
you'll see an open slip" turned into this little adventure.

Posted by Jax Robertson at 7:00 PM