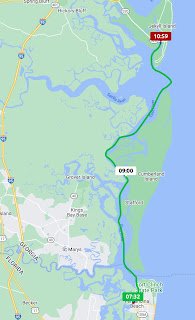 We got off the ball in the early hours, before we even had breakfast. This would be the calmest part of the day. There's an inlet we had to cross that's sizable, St. Andrews sound, and we wanted to get it done before the afternoon winds picked up. It didn't matter as it turned out -- the winds picked up pretty quickly. There's a nasty shoal smack in the middle of the bay so you have to go almost all the way out to the Atlantic before you turn back in. But the winds were from the west, which meant choppy waters but nothing drastic. Russ and I talked about it later and it didn't rank near any of the worst water we'd had.

Along this section of the ICW the tide is pretty intense. Due to the bow in the land between Florida and New England, upper Florida, Georgia, South and North Carolina all have big tide swings. They can be 8 to 10 feet. As a result most marinas have long docks that run along the waterways, so it's just a matter of sidling in and not some trick maneuver to get into a slip.

The tide was pushing us along as we approached the marina. On any other day we would have turned around to get on the dock, since it's easiest to do against a tide. But the winds were howling, blowing us onto the dock. We lined her up in the empty spot we'd reserved and let the wind do the rest.

Then we had Mexican food at Tortuga Jack's, which is our favorite restaurant here.

The plan tomorrow is similar, except we know there will be even stronger winds. Cooler temps, too. Various weather apps have already alerted us. We plan on anchoring so we're not too concerned. So far, though, the word to describe the trip thus far is windy.

Posted by Jax Robertson at 6:28 PM