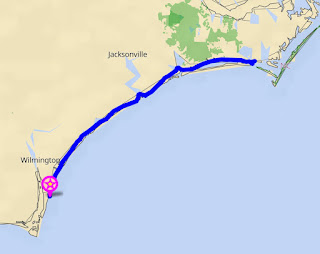 Beaufort NC (pronounce bOHfort) as opposed to Beaufort SC (bEAUfort). You can stop in both on the ICW. Go figure.

All in all, not our best day. There were a number of factors that contributed, and 99 % of the day was fine, but it's always the finish. Today ended in an insurance claim. No one was hurt, and our boat is completely undamaged. But the sailboat 2 slips down got damage on a davit. Stay tuned... story a-comin'.

Given we stayed in Carolina Beach for 3 night we were ready for a long day. We wanted to get Beaufort. The weekend forecast is looking spectacular so crossing the Neuse and Albemarle would be awesome. But long days, even if we arrive at a decent time, are just tiring. So that is probably the first contributor to what happened.

Keeping in the theme of the trip so far the day got windy. We saw gusts over 25 knot throughout the day. Even by 4:30, when we were docking, they were still around 15. We planned for that.

As we approached the marina I noticed a number of sailboats anchored outside of it. All were pointed at the marina which indicated to me neither the tide or wind were having much of an impact. We'd be entering the marina in the same direction they were pointed.

We were asked to take a slip down a fairway. Here's where it get fun: The fairway is bounded by 2 t-heads, each of which had boats on them that overlapped the pier space of the t-head; on the right, by 5 feet, and the left by nearly 15 feet or more. A HUGE sailboat on the left. The pier of the t-heads was 100 feet, but that boat was well over that (PS: Kaizen is the boat, and is 160 feet long. We could see its mast from way far away. I thought it was a radio tower.). So challenge number two (number 1 being winds) was getting inQuest into that fairway whose entrance was reduced by 20 feet at least.

Pointing into the fairway the winds were on our port. The slip would be on our starboard. So we set up more to the port side, expecting winds to blow us to the right.

Get the scene? HUGE, SHINY,EXPENSIVE boat in the left, other boat hanging over on the right, winds coming from the left. We set up closer to the left...

We enter. As we're heading slowing forward we notice we are not being pushed to the right at all but rather to the left. Towards the danger! And within moments, we had no room to turn or maneuver. We cleared the big, shiny boat but within a few more moments we were up against another sailboat's stern (Note: it was in the slip just beyond the big one, but it, too, was also 10 feet longer than the slip, otherwise we'd have just been on the pilings). One of its davits got caught in our rails and got twisted. Russ managed to push us off. By then the dock hands realized we were in distress and ran to an empty slip just ahead of us. Once Russ freed us we bumped forward and could twist ourselves around a piling and get into that empty slip.

But the damage was done. We didn't notice that the current was stronger than the winds, and pushing us towards the left, but because of the crowded situation on that side of the channel, once we did realize that we had no room to maneuver.

I was so upset I went to bed immediately without dinner. That left Russ to deal with the marina and the owner and the insurance company. He was frazzled by morning. We planned on staying 2 nights, but once everyone left this morning we weren't in the mood to stay. No boats to damage now! Of course we left without a hint of issue.