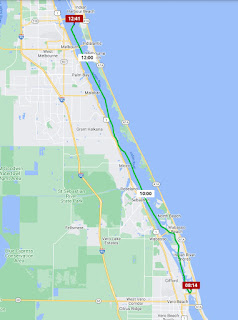 We were up early and wind was still blowing, about 15 knots. Not great. But the only maneuvering we had to do was get inQuest to the fuel dock before heading out. The wind was on the nose, so doing that was easy and smooth. We pumped out and tanked up on water, then we headed out.

The forecast for the day predicted thunderstorms. A large band of them loomed across Florida, between us and our next destination. No way we weren't going to get wet. But the overall winds were dying down and as luck would have it we passed through the storm with only a little rain and a little lightning. I never even heard thunder.

It drizzled a little while we dropped the anchor, but overall we couldn't have asked for a better day.

We picked this location for 2 reasons: 1, the TV power brick died and 2 we needed a couple of groceries. Near this anchorage is a public dock with dinghy access, and from there it's a 15 minute walk to the Publix. While I did that Russ went to the Ross Dress For Less store that housed the Amazon lockers. We were back on the boat after our little shopping spree in about an hour.Russ did attempt to make water while underway to Vero a couple of days ago. We got about 40 gallons. But he noticed the filters were getting seriously dirty. Uncertain if that was from the water or the media filter, he shut it off, hosed the filters out, then decided more research was needed. It's one thing to grab water from the Atlantic, it's another from the ICW with all the little rivers and tributaries and the icky stuff they bring. More research will be done.
Posted by Jax Robertson at 4:52 PM