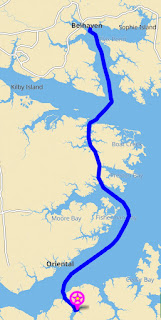 Up and out early while the wind was calm we continued north and onto the Neuse. Despite our efforts the seas, which rolled in off the Atlantic from the northeast, were not exactly calm. We get solid 2s with occasional 3 footers.

We ran faster than normal which smoothed out the ride a bit. About 2/3 the way along the port side bilge pump came on, meaning we were taking on water. Russ went below to the engine room and discovered a small leak in the engines raw water intake. He tightened all the clamps but one wouldn't tighten. He assumed it busted and he'd need to replace it. We slowed down, watching the engine temps, and once we made it around the turn so our backs were to the wind (smoothing out our ride) we shut off the port engine. Russ replaced the clamp within a few minutes. The engine came on without hesitation and we were off. Nothing like on the fly mechanics.

We cruised along the Goose Creek until we got to the next big body of water, the Pamlico.  Crossing it was a little choppy. Despite the predictions of calm winds we were having steady gusts over 15 knots. The ride smoothed out on the run up into Belhaven.We've been here a couple of times now. The dockmaster even recognized us. The last time we were here we docked just after a thunderstorms, and winds were 40 to 50 mph. Thankfully, they largely have a single pier you sidle up on and not slips to negotiate. He, too, remembered that storm and our docking. It was an event for us all. This time, it was cake.

Posted by Jax Robertson at 7:36 PM