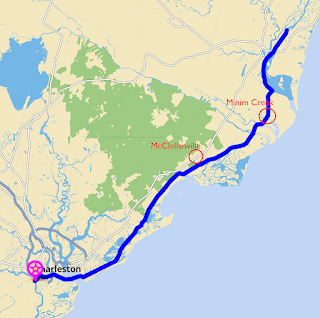 We knew we wanted to cross Charleston Bay early for a couple of reasons. First, we had to traverse Eliott Cut to get there, which can bustle with boaters and jet skis. Being narrow and shallow it would be nice to have it to ourselves. Second, the bay itself can be snotty, so an early morning crossing would be calm. And it was.

Plan A was to get to McClellanville. We had reservations but realized we'd get there before noon. Plan B was to get to Minim anchorage, which should be calm, However, glancing at the weather, things might be nasty tomorrow. There's a second body of water, Winyah Bay, that might be challenging to cross then, so we decided (plan C) to put in a longer day and get it behind us.

Not too far beyond Georgetown (a stop we've made a couple of times, now) was an anchorage. We dropped the hook and made dinner.

Possible t-storms tonight, possible big winds tomorrow. Most weather apps update every 4 hours. It's best not to make plans until the morning.

This is from the morning we left Beaufort.
Movie production takes a while on a boat
but I thought this was very pretty.

Posted by Jax Robertson at 5:45 PM