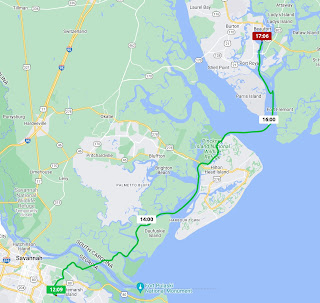 A week or so ago we had a few things we wanted from Amazon and a marine supply place. Russ put in an order and had them shipped to Thunderbolt in Savannah. We'd already arranged this with Thunderbolt when we had the conversation, "How long in advance do we need to give you notice we're coming to get a slip?" The answer was, "Oh, just a couple of days."  That was a lie -- we tried for days and the never had vacancy, which was why we stayed at the yacht club. This morning, Russ lowered the dinghy and took the trip across the ICW to get to Thunderbolt and claim out packages. We both showered, ate a quick lunch, then headed out around noon.

The section from Savannah to the Savannah inlet is a bit dicey; twisty and lacking depth. Then things got better. I believe it had been dredged, so depths weren't as iffy. We left at lowish tide, but it was rising.

By 3, as I mentioned above, I was ready to end the day. We started looking for anchorages around Hilton Head (since we've yet to stop there) but nothing looked sheltered from the many ferries and tour boats that zipped up and down the bay. Besides, the weather was nice enough to traverse the Port Royal Sound without effort. We moved on.

We thought we'd take an anchorage on the right. However, with the direction of the winds tonight and an outgoing tide (which we'd have most the nigh) previous folks at anchor claimed it could be rough. We moved on. (If you look closely at the map you'll see a dipsy-do maneuver.)

A longer vid from Sunday, when we left Brunswick,
got into the channel heading east and got onto the
Atlantic. All during sunrise.
From the same vid, but focus on the sailboat that
hoisted it's sail and forget where it was going...
Watching that morning it made me laugh.

Nearing Beaufort, SC we spied an anchorage near a yacht and sailing center we'd docked at before. We tried to hail them, but they were teaching (we deduced that by the teeny, tiny sailboats going in circles in front of the place). So we took the anchorage.

Pasta was made, beer was served, and we're settling down for the night.

Now for a rant (feel free to skip): We did enjoy our stay at the Savannah Yacht Club. There are many reasons you should come here. The food at the restaurant was wonderful, the fuel was very inexpensive, and the showers were very nice (I rarely shower off the boat). On the negative side, the dockage fee is kinda crazy. $4 a foot. I mean, it's Savannah, not Key West. But fine... it's a nice yacht club.

But to make sure you don't lie about your length while at the dock they measure your boat, eyeing the start and end and using a rolling-wheel length counter. Okay, we get that too, and it's not the first time. Some walls are stuffed and need to know exactly how long you are to fit as many boats in as they can. Therefore, we know that from the tip of the anchor to the back of the dinghy we measure maybe 44 feet. They came up with 48. They measured it twice, both times 48. So that's what we had to pay. Fine. Again, nice marina, and we saved a ton on fuel so whatever. Do you see those docks? I mean, why? It's not like they were full, it's not like they had to make room for everyone -- we were the only boat there. Just seemed like a bad way to treat a guest, which, given reciprocity of our own club, we were. 4 dollars, that's high. 48 feet, that's off. No reason to do that other than to make as much money as they could. Despite a reservation for 2 nights, that's the reason we did not stay. That might also explain why no one is there.

Posted by Jax Robertson at 7:22 PM