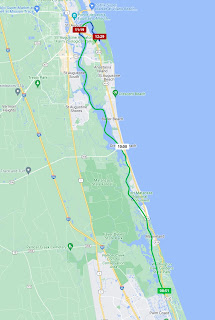 My brother joined us for a night while in Palm Coast. We walked to the nearby mall/condo area but, given it was Monday, many of the restaurants were closed. The sushi place, however, was open. We had a great dinner. We even introduced my brother to sake.

The voyage to St. Augustine would be very short so we dawdled our departure with some breakfast as the Cracker Barrel. Say what you want about the place, they have awesome blueberry pancakes. Then my brother dropped us off at the marina and he went to work. And, for some value of "work," so did we.

The wind and waters were crazy still when we left, making getting off the dock trivial. We had a number of skinny sections today, where we navigated by USCG depth sounding maps that we uploaded to on of our navigation tools, Aquamaps. The colorful overlays certainly gives you more confidence while traversing the shoals. We do, however, keep one eye on the depth gauges as well.As we traveled the winds came up... and came up... and came up. We'd been instructed by the St. Augustine City Marina (owners of the mooring balls) that we had to check in at their pier before proceeding to the ball. By that time the winds were steady at 22 mph. It helped blow us onto the pier, but the chop made being there a bit bouncy. They weren't sure our ball was open yet so we had to wait while their little skiff went to see if it was open. Getting off the pier took a bit of effort, but all went well.Next came navigating the tiny channel behind Anastasia Island to get to it. Nothing like trying to make your way in a little waterway for the first time in a small gale. While the wind was tough the waters were fairly calm, so once we got attached we didn't bounce much. Should be a good night.

We then dinghy-ed to the lighthouse public dock where we met friends from the loop, Jamie and Trish (About Time). We are cheering on their search for "the next boat", hoping we'll do some traveling together next year. Fingers crossed!

Posted by Jax Robertson at 7:26 PM