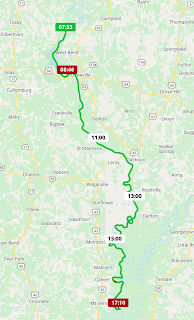 Day 2 of the 3 day march is behind us. We successfully anchored in the Tensaw River, which is really wide and hold well. Between Turkey Point and the Tensaw I would argue these are the best anchorages on the lower Tombigbee. We'll mark them for the future.

Two boats also anchored at Turkey Point, Buena Vida and Uno Mas. We call them "the Spaniards." Buena Vida had issues starting their generator and their house batteries were running low. Russ tried to help suss out their problem, thinking it was the starter relay (since we'd had that problem ourselves a couple of times on the engine) but he couldn't find it when he looked at the unit. Once we were underway Russ found the manual online and sent them the info. We hope it helped.

Last lock today. Making a GRAND TOTAL of 78 this season. That will be the last lock we go through until next year, if we do the loop. Specifically the Dismal Swamp, which we both love.

Lots of looper traffic as well as tow traffic, which kept us on our toes all day long. But no issues or emergencies.

Another task Russ had to do while underway today was fill out the contract with a RE company in NOLA. I fail to understand why these people don't use DocuSign, but we've dealt with e-docs and a couple of different RE agencies. They all seem to have "their own." It's like reinventing the wheel. After arguing with our agent for a few minutes, he proved it was the software and not "user error." We got it done, nothing irks Russ more than when people tell him software bugs he finds are user errors.Movies are still coming. Network has been sketchy at best, and non-existent at worst. We plan on spending a couple of days at The Wharf in Orange Beach which will give us time to put some vids together. And sleep.

Posted by Jax Robertson at 7:37 PM