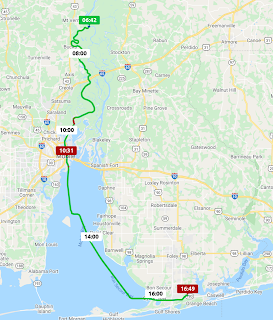 As a result we were drifting into Mobile, Alabama, right around 10:45 am. That gave us time to walk a dog then grab us some lunch before getting underway again. It also gave us some time to stall a bit. The winds were up and that meant the bay would be choppy. The couple of hours in delay allowed that to all settle, as predicted. As a result, our 3 hour trip across the bay was quite lovely. Seas about 1 foot, mostly on our stern, which is a comfortable way to take them.

You'll notice there's a 90 degree turn off the main channel to get us onto the bay. The channel, which goes directly from the gulf to Mobile, is wide enough and deep enough for two tanker ships to pass one another. To accomplish this, the channel is dredged almost constantly. What the dredgers bring up is dumped into well marked "spoil areas". Our straight line to the port was us going in between 2 of these areas. From then on the depths in the bay range around 7 to 12 feet. So, back into the skinny waters.Last long day, for a while. We hope.

We plan on staying 2 nights, maybe longer. We're squeezed between the nor'easter and a major low, so the winds are going to be a thing for a while. Under normal circumstances we're 4 days from Appliachicola, then we'll start the trip around the Gulf. We'll see how the weather affects the near future.

Getting settled in Turkey Point.
Keep in mind, this is RIGHT OFF the channel.
You can see a boat zoom by. We had a couple of tows
come by during the night, too.
Getting into and leaving Demopolis lock, after our engine issue.
We're not the fastest boat but we were that day.
Alegria was already in the lock, ahead of us by just a few minutes.
We followed her into the anchorage.
We picked our spot due to its close proximity to the
boat ramp for dog walking.
We hit something!!!
As we slowly move on you see Russ checking hatches for
any water intrusion. It was that hard.

Posted by Jax Robertson at 7:49 PM