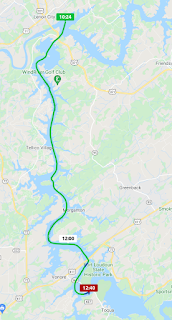 Back out the Little Tennessee (Tellico Lake) we headed to the Sequoya Museum and its anchorage nearby.

This little lake is the first that makes me understand the appeal of lake life. There are a number of restaurants, trails, and picnic areas, not to mention all the nifty little coves for fishing and swimming or a quiet overnight, all of which accessible by boat. If you want a house with a boat on the lake, this is the first time I see why.

We did have a little excitement on the 2 hour trip out. Just past the bridge that marks your arrival onto Tellico Lake a number of speedy boats and jet skis were enjoying the Saturday. One of these boats had a group of people on it all out to wake board. This is a new (well, new to me) watersport, like water skiing where you use a line to pull you up and out of the water. But you stay close to the boat and ride it's wake, like a surf board, so you can ditch the line and keep up with the boat.

One of the boats sharing the lake was such a boat. We watched a bit as the rider got out and rode. He did well. The boat traveled just a little faster than us and made its way in front of us to cross to the other side, presumably. And just when they were right in our path, the wake boarder fell. I stopped our progress immediately and turned hard to the right to give them lots of room. We're not a fast boat by any means, but in their situation, neither were they. The maneuver was stupid on their part. Thankfully we were alert and had time to react.

We met the crew of Apres Sail at the museum. After a quick chat on radio they took the dock and we anchored. It's a quick tender ride to the dock to walk the dog. Then we met them at the museum, learned about Sequoya (a fascinating little story as he is the inventor of the Cherokee written word). From there we all piled into the tender and went to the Fort Loudoun, where we toured its museum then walked the grounds. A replica stands there now, but its complete with all the buildings. Also interesting. (Spoiler alert for both museums: settlers screwed the native peoples repeatedly and without remorse. Just sayin'.)

After the fort we headed to the Lakeside Grill (at the Sequoya Marina) for dinner around 4:30. We'd been told by a local today was the last day they'd be open for the season. Which was true... except they closed at 3 pm. So we meandered across the river to Rick's at the Tellico Marina and ate there.

On the ride back we saw another looper boat, Spirit, who'd we chatted with on radio but Michael and Kathleen spent time with on their loop. As we passed Russ and Carol invited us aboard, and we chatted a bit, catching up on adventures and plans for the rest of the journey.

This was the most social we'd been since, well, last summer on the Chesapeake.

On the right is the wakeboard boat.
They get in front of us and we have to stop
and go around because the rider fell off.