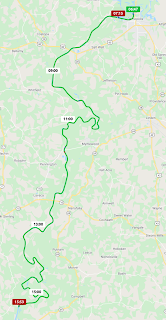 12 boats came in on the same day we did. And since none of us could stay longer than 2 nights at the Kingfisher Marina, 12 boats had plans to leave this morning. Organizers set the "go" time at 6:30 am. At the stroke of 6:30 we were slowly moving out of the slip. By 6:30 and 5 seconds, I realized something was wrong -- we didn't have a port engine. It started fine, and ran, but I had no throttle control and therefore, could not use it to drive.

With one engine I managed to get inQuest out of the slip and immediately dock her on a t-head. Since lots of folks were already getting set to depart, they realized something was up and were on the pier waiting to catch lines. Once docked, Russ investigated

During our stay in Demopolis Russ did some engine maintenance, changing the oil on both engines and replacing the transmission fluid. Somehow the connecting pin for the throttle controls got disconnected. He found it and fixed it and we were on our way -- we weren't even the last boat out.

All 12 of us planned on locking down together. The lockmaster told us he had 9 pins (normally there are 10, but one wasn't working, or to be specific, was totally missing). 9 of us got on the pins, including us, and 3 rafted. Uno Mas rafted to us. We locked through without incident.

The plan was to get to the anchorage Bashi Creek, which we'd used on our way up in June. However, Russ started planning the next few days and taking a hard look at the weather. A massive low is headed our way, and with it some insane winds. And that will make the Mobile Bay a misery. Rather than dawdle we decided to put in a couple more looooooong days and get to Orange Beach, Alabama, by Tuesday night.

So Bashi is out, and Turkey Creek became the target.

This is our last "river" night. There's only 1 lock tomorrow, and we'll be back into tidal waters.

Side story -- We have now experienced the spectrum of "courtesy vans."

Fort Loudoun:  Keys are in the cars, so just take it.

Kingfisher: The car is available in 2 hour slots only. Sign up with the dockmaster for a time slot. You're handed the keys. Then told there's a Marathon gas station up the road. When you're on your way back stop there -- they know the car. Ask them for $1.50 of gas and be sure to get a receipt since you have to hand that in with the keys. Oh, and while there call the dockmaster so she knows you're coming back. (This is all true!)

Posted by Jax Robertson at 6:56 PM