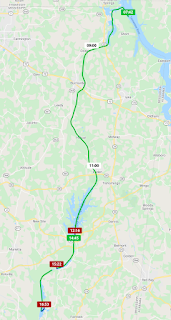 It wasn't supposed to be a long day, but alas, locks. And fog. In fact the fog was a bit thicker than we thought it would be, so our progress was slow.

The morning started out wonderful. Nippy, but clear, with wisps of moisture coming off the water. We were going to meet with Apres Sail for travel today. They were anchored near Aqua. Anchors up around 7:30, we met them around 8 am. So far, still clear, but we could see fog in the distance.

The next hour was thick and slow. Since we have all the toys to deal with fog we led the trek. We have radar, AIS, an automated fog horn, and nifty glasses that make seeing in the fog much easier. At 6 knots we wound our way between the islands at the top of the lake, me at the helm following the magenta line while keeping an eye on radar for possible fishing boats who've wandered into the channel. Meanwhile, Russ sat outside on the bow, watching for any logs or debris we might hit. We've done this enough times that we're pretty comfortable in fog. In fact, our "no go" is if, from the helm, you can't see the burgees.

Apres Sail, however, were not amused. Over the radio they commented we were crazy and they'd never do this again. I felt bad about that -- Florida and its fog has us trained, I suppose. This wasn't the worst we'd been in.

The fog was suppose to lift at 9. Seriously, 9:01 the blue sky came out and the fog disappeared. The rest of the day was gorgeous.

The other hitch was a lock, Whitten, the first of the locks on the Tombigbee. First we had to wait for a tow to come up -- fine, we do that a lot. But once up the tow didn't leave the chamber, but waited for his crew change, which took about another 30 minutes. Then we were allowed into the chamber, but a number of boats were also trying to lock down, so the lockmaster held for them. Which we get -- we'd been in that position ourselves. But it took another 45 minutes.We went through 2 locks, then turned off an anchored right before the 3rd for the day. By the time we dropped the hook it was almost 5 pm.

Posted by Jax Robertson at 7:46 PM