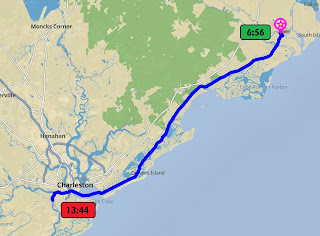 Two challenges loomed as potential issues for traveling today. The first was tide. Specifically, around the area of Isle of Palms there were reports of intense shoaling, with depths as bad as 3 feet in some places. While that's at low tide, we have 4 feet to our draft. So we wanted to pass through the area before low tide. And that meant either waiting until noon, or going very early. Guess which we chose?

The second issue was the Charleston Bay. The winds were supposed to be up today, so it could be a choppy and unfriendly piece of water.

I'm happy to report neither caused us any trouble. Yes, we noticed shallow depths but we got through them. And the winds weren't near as high as predicted. That had got to be a first. Certainly rare, in our experience. But we'll take it.

We're anchored just on the other side of Elliot's Cut by the St. Johns Marina. We had stuff sent there, and we're expecting it to arrive tomorrow. No. The ballots are still missing. But given our luck so far we might be here a couple of nights.

Posted by Jax Robertson at 7:20 PM