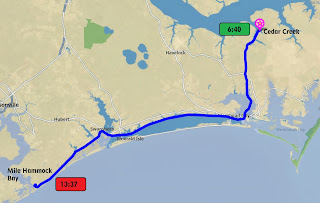 While we didn't have a long way to travel we were up and out early. Windy weather was coming, and we wanted to be dug in by that time.

The only big water was right around Beaufort today (the big right-hand turn on the map). Given the early start we hit is by 8 am when things were still calm. We did experience decent gusts as the morning went along, around 20 knots. But by then we were on the skinnier part.

Most of the day was spend being buzzed by a hundred zippy, over-powered, little boats. Was a time those all would have had Trump flags on them. So, some things change. We did get hailed a number of times from larger, bigger boats asking for slow passes. Kinda shocking, after months of big lobster vessels screaming by us without a word. We were beginning to think our radio didn't work.Mile Hammock Bay is on the large patch of land used by Camp Lejeune. It even had an entrance for amphibious vessels. At times, boaters are prohibited along this section of waterway due to maneuvers and live fire. We know people who heard gun shots along here, wondering if they missed the "turn around" sign. They're fine, by the way.

Posted by Jax Robertson at 4:19 PM