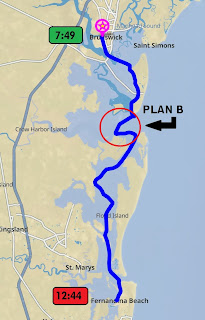 We purposely waited 3 days in Brunswick for the nice weather to happen come Sunday. That is, today. There's a particular body of water, the St. Andrew's Sound, that we want to traverse with little to no wind. The sound has a massive shoal in its center so you must go all the way into the Atlantic, then make a quick u-turn and head back in, a trick you'd like to do on calm seas. On our way up this season the sound was a little spicy. Friends of ours, who came just 1 day later, were met with 6 foot seas. Nope. Not doing that!

But the weather system moved just a bit slower than predicted. As a result, the wind was still a little high and the water a little unsettled.

We'd known of an alternate route called "the west route" for a while but never felt we needed to take it. We made it plan B. Coming around Jekyll Island we started toward the Atlantic and almost instantly had a head sea. It wasn't awful, but we weren't even 3 minutes into a 45-minute, against-the-current run when we were slamming. Looking into the distance it was tough to see if it would only be this bad or get worse. Rather than be unhappy, we did an about face and headed to plan B.

Plan B did have one caveat. Given the north wind once we made the turn back to the ICW we might have beams seas, and they might be intense. There's a creek out of the very back end called Floyd Creek. Friends of ours traversed it in the past. While insanely thin we were on a rising tide so even if we got stuck it wouldn't be long until we could float off. We called that Plan C.

The land on the left is Jeklly Island. We turn left (east), then do a
180 and head west. While still bumpy it's on our stern, so
more comfortable. The water is calmer once we turn hard
left, then flat back on the ICW.

But Plan B worked like a charm. Oddly, the waters on that side were eerily calm for the weather. Overall, we were pleased with our decision.

It was supposed to be sunny, warm, still, and calm. Sadly, today was none of those. So icky, I didn't even take pics.

Posted by Jax Robertson at 5:28 PM