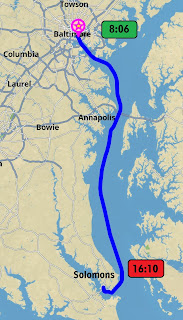 With Ian and the disastrous aftermath down in Florida we've been going back and forth about what's the right thing to do. On the table at one point was "just stay here", here being in Baltimore. We could rent a car, do a bunch of running around (we still have stuff in storage in California and New Orleans). Then rent a place until Spring.

Then it got cold. And we said "Bugger that! We're outta here!"

The next 3 days also looked like amazing travel weather. If we do some longer days, we could be off the Chesapeake by then. Early on Sunday morning, we fired up the engines and headed to Solomons.

The wind was about 10 - 20 knots throughout the day, which isn't great, but coming from the west. We stayed in the lee of it, hugging the west coast, and had great water as a result. Right around Annapolis a regatta was going on, so our only excitement was staying out of the way of the big sailboats. Otherwise, the trip was uneventful.When we arrived in Solomons Bella Gatto was already anchored. We dropped the hook and invited Jayne and Jonathon over for some chips and salsa. While they were in Baltimore with us, they left to go river rafting, so we barely had time to socialize. I'm hoping we'll see them on the Dismal.
Leaving Baltimore
Quick but bumpy vid of the Annapolis regatta.
The boat zipping around was there to keep us from
disturbing the race. It happens right next to a large
vessel anchorage, which is why big ships are there.