Elizabeth City to mouth of the Pungo, anchor 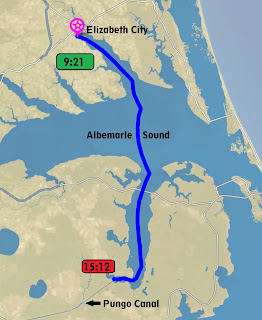 Originally we thought we'd spend 2 days in Elizabeth City. But there was a slight change in the weather. Sometimes, you gotta run when you have the chance.

A quick front moved through last night, right around 4 am. With it the winds changed, making them strong from the north. Travel today was all to the south, so water should be on the stern, and we like that. Also, there's a number of large bodies of water we need to get through over the next couple of days. Tomorrow continues to look stellar (one of the reasons we were waiting, initially). So if we can get all those behind us, it's just a lot of ICW channel travel ahead. For the most part.

With that we tackled the Pasquotank River out of E. City, crossed the mighty Albemarle, and slid south along the Alligator River. All sizeable. All something we want to be aware of.

The Pasquotank was fine. The Albemarle was a little spicy. While the winds were from the north, and that did give us some following sea, there were remaining swells from the east that beamed us. It was a little like being in a washing machine. Not horrible, but not a silky ride, either. Once on the Alligator, the seas were strictly following (so pleasant for us), but fairly strong. We would not have been happy traveling north against it.

With those challenges out of the way we dropped the hook at the mouth of the Pungo canal. Tomorrow we'll get an early start to knock out the next 2 hurdles, the Pamlico and the Nuese.

On the back end of the Dismal, heading to E. City.
At high speed you feel like you're on one of those air boats!

Posted by Jax Robertson at 5:40 PM