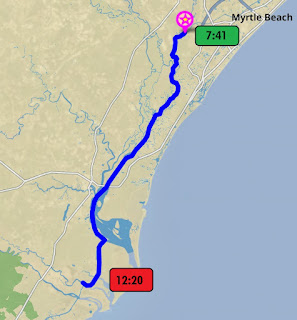 We get up early. This time of year that means "in the dark." It was a moonless morning with clear skies, and the anchorage wasn't near any place with light pollution. So I shot a couple of night photos.

With coffees and breakfast in our tummies we hoisted the anchor and kept heading south. Yesterday was a longer day so we purposely picked a short run today, about 4 hours. We were on the hook by 12:30.

Packages and mail has been a bigger issue for us on this trip than any before. We still haven't received our mail-in ballots. They never did get to Southport, and we affirmed that they had been sent. So it appears the USPS has lost them. And it's the weekend so there's nothing we can do until Monday.

I so want the ability to vote by phone. I find this paper-stuff to be aggravating.

Worst case scenario, we rent a car and drive to Sarasota and vote in person.

Posted by Jax Robertson at 4:02 PM