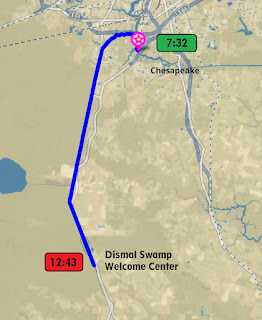 The Dismal Swamp is a 2 day journey, so I've combined them in 1 entry.

For the last couple of weeks we've heard many tales of how the Dismal was clogged with duckweed. Duckweed is a fine leafed plant that floats on top of water. When dense it makes the water look like land. Very swampy.

There are 2 routes from the Chesapeake that get you south: the Dismal and Coinjock. We're not fans of Coinjock. It's more popular for other boaters which makes it jammed this time of year. In addition the next hurdle was crossing the Albemarle Sound, and the best day to do that will be Saturday, so far as we know. If we had to hang out somewhere for a couple of nights, we'd rather be in Elizabeth City.

We left Top Rack early, and doubled back a bit to get to the Dismal Swamp canal. We were at the first lock by 8 am, and the lock opens at 8:30. (These locks only open 4 times a day so you have to manage the time.) While we stood station the lockmaster there did everything he could to discourage us from going. "The duckweed is 3 to 4 feet deep in places." Not at all true, by the way. Clearly, these lazy men (there were 3 there) didn't want to bother opening the lock.But we insisted.

Duckweed was not the issue, for us anyway. In fact it kinda made the trip, well, trippy. The swirls and patterns of the greeny texture made me feel like we were floating along Van Gogh's "Starry Night". What was a problem -- and something the lockmaster could have mentioned that would NOT have been a bold-faced lie -- was debris. We bumped and banged on more stuff on this trip then any of our trips through the Dismal. There were many logs and drift below the surface, which was further obscured by the duckweed. This was partly due to all the rain from Ian remnants. But largely due to lack of vessels constantly pushing stuff aside.

We docked at the Welcome Center for the night. Bella Gatto joined us and we did docktails on the bank. Russ checked our strainers to make sure we weren't getting clogged. They were totally clear. No duckweed!

Engines on at 7 am we shoved off to finished the voyage, getting into Elizabeth City just before noon.

Posted by Jax Robertson at 1:47 PM