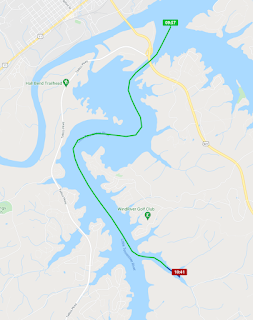 After having dinner with the crew of Après Sail they decided to go onto Knoxville for a couple of days, then explore the Little Tennessee River and it's lake, Tellico. Meanwhile, we plan on hanging out on Tellico Lake for a couple of weeks. We'll all meet again in a few days.
The entire lake is about 30 miles long, then there's another dam that has no lock, so there is no going beyond that point. This particular place, Power Line Cove, was recommended to us by folks of the FLYC, as they do group outtings to it. It's well protected and has a couple of places to dock to walk a dog. Our hopes are high.
We had a small hitch in bringing up the anchor first thing in the morning. While we had no weather, no wind, and no currents to speak of. Yet something was on our bridles. It took some backing up and bucking to free the lines and chain. Eventually, it worked out just fine. But very weird.
The journey today was just a little over an hour. Another later start since we woke in a thick pea soup. But once it burned off, the sun was warm and the sky was blue.
Note: Après is French for after. Michael and Kathleen used to do the sailboat thing. This was the first power boat they owned, from what I understand, thus the name -- After Sail.
Posted by Jax Robertson at 8:13 AM