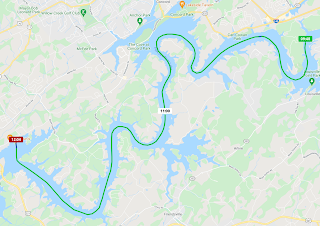 Having just been at this marina a week ago or so we decided to just anchor out. However, looper friends, Michael and Kathleen of Apres Sail, were coming to the marina. With a quick tender ride we joined them for dinner at Calhoun's.

We spent an extra day at the FLYC, or Fort Loudoun Yacht Club. Originally we were told we could only stay Friday night since there was "haps" on Saturday. The haps was the Gator Hater party they have whenever the Tennessee Vols play the Florida Gaters. But they invited us to join them, so we did.

Note to loopers: The FLYC has reciprocity with other yacht clubs, including MTOA. Fuel here was the cheapest we've had in a while as a result.

Fog blanketed the river this morning. We suspect this will be a thing for a couple of weeks given the air is cooler and the water remains warm. Besides, it was going to be a short day. By 9:30 in the morning it was lifted enough that we could travel. We can travel in the fog, but since it was dreary and rainy when we came up I really wanted to see the river with sunny, blue skies on our way down.

No issues. A little debris to dodge here and there. It took 2 tries to set the anchor, but it's solid. Nothing left to do but watch the sunset.

Posted by Jax Robertson at 2:57 PM