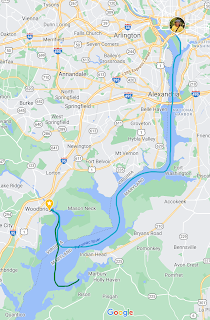 Throughout the loop there were some destinations that really hit some chord for the "we live on a boat and travel" lifestyle. New York (especially the Statue of Liberty) and Chicago come immediately to mind. But seeing the Washington Monument and Capitol building in the distance definitely plucked the heart strings. No matter where you fall in the political spectrum this place means something to us all.

We realized that, since we were going to fuel up first thing, there was no reason to walk the dog right away. I could walk her at the marina while Russ filled the tanks. So we hoisted the dinghy and brought the anchor home, a bit of a challenge since the Mattawoman had a lot of floating vegetation, all of which balled up on the anchor and bridle lines.

The day went perfectly. Crossed the Potomac to Belmont Bay Harbor Marina and arrived at 9:02 am (they opened at 9). Walked the dog while Russ fuel us up FULL, then made our way up to DC. Against the current again today but we weren't in a hurry. We arrived around 1:30 pm.

We're in a yacht club tonight, largely because we need to do laundry and we had some packages sent here, so we felt obligated. It's an awesome location and amazing facility. Just a bit pricey. We plan on moving tomorrow to an mooring ball just on the other side of the waterway for the next 2 nights.

Once we started talking about all the thing we needed to do and wanted to do and thought maybe we should stay another night. Then we saw the weather. Right now we're getting rain from remnants of Sally. Once done, we'll get another cold front coming through. The lows are projected to be in the mid to upper 40s.