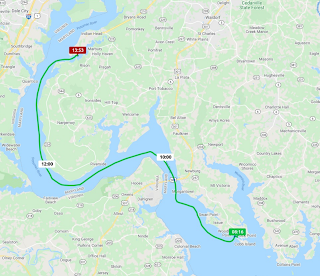 Longer day today. Based on mileage it should have been a 4 1/2 hour run. But we had an outgoing tide most of the day, and in the narrows of the Potomac, that made for a formidable current. We were only making 6.5 to 7 knots. And, since we don't have tons of fuel, we didn't want to push that. The trip was closer to 6 hours.

Despite that the day was wonderful. Cool in the morning which turned into moderate temps midday. Calm waters. Little wind. The only bother was the persistent haze that dimmed the skies, looking overcast when it really wasn't. This is nothing compared to what they experienced in San Francisco, another past home city, so I can hardly complain. They've had terrible summers for the last 3 years.

Bella Gatto led the charge today. Which I'm so grateful for! Just as we were leaving our anchorage a navy range boat hailed them. They gave Jonathon explicit instructions as to how to proceed through the area, moving us out of the main channel to follow labeled buoys through shallow waters. Apparently, they were going to have live fire exercises and, for some reason, wanted us out of the way. We just obediently followed the leader.

Mattawoman is wide, but very thin. We intended on anchoring in front of a little marina not too far up the creek. As Bella Gatto near it, however, they hailed us and said they were aborting, finding depths around 4 feet. We both dropped anchor in a deeper section, but it's a bit farther from the dinghy dock.

Posted by Jax Robertson at 5:33 PM