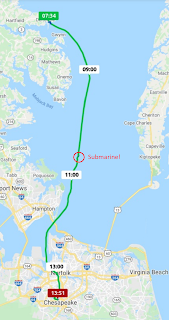 A couple of hours into our voyage across the Chesapeake Bay I started to wonder if I had anything to write in the blog. Skies were overcast, a little breezy causing 1 foot seas, and moderate temps. Was looking pretty boring. The only bit of radio excitement was they were doing some live-fire exercises near the mouth of the bay. We weren't headed that way, so no bigs.
As we approached the York River, and the channel that leads out of it, we noticed a fast boat. It didn't have an AIS signature, but we watched it since being on our right he had the right of way. As we got close I thought we had enough space to cross in front without impacting his course. At that moment, he hailed us. He was a navel vessel escorting a submarine (!) out of the York River. He asked us to stop and wait. Which we immediately did, of course. It was incredibly cool watching this thing go by at over 14 knots, the wake of which rocked our socks off. Still totally cool.
An hour later we left the Chesapeake and entered the Elizabeth River, waterways of various shippers, the Navy, and Norfolk. Boats and ships were everywhere today, making us both have to watch various maps and charts to dodge and weave all the traffic. We also saw dolphins for the first time in months.
We ambled through Norfolk which is the start of the Intercoastal Waterway. Just beyond the city is the more industrial area, full of shipyards and barges and factories that load vessels with coal and whatnot. The ICW winds a bit here. Then we make one last turn passed the dreaded "Railroad Bridge #7". I say dreaded because the sucker sees me coming and promptly closes. Today was NO exception. We saw it up as we approached but by the time we got here it was coming down. It closes about 10 minutes before the train -- of which there were 2 today -- then opens about 10 minutes after. The whole delay was about 45 minutes. I hate that bridge.
Note to fellow boaters: If you want to call about it's status DON'T call bridge #7. You need to call bridge #5. This is experience talking.
At last we reached Top Rack marina where we fueled up. We didn't need to fuel up, but this is the cheapest gas on the ICW so we take advantage! Last time we were here was when we put diesel in our water tank. We felt pretty good not to repeat that incident. Just as we finished another boat sidled up to fuel up as well. We started talking (because we both knew we'd seen each other somewhere before) and his fuel fill clicks off. And he realizes ... he put diesel IN HIS WATER TANK! Clearly there's some kind of vibe in the place.
Posted by Jax Robertson at 5:39 PM