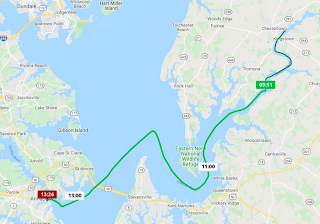 It was probably a mistake leaving the anchorage today. Mostly because it was a lovely location. But we had packages waiting for us in Annapolis so we thought it best to get over there.
We left just before 9 am, and the first 2 hours of travel were quite lovely as we snaked down the Chester River. But as we neared the bay, traffic picked up. Sail boats puttered along while power boats zipped by as fast as their motors would take them. The water became choppy and confused, only because of all the boaters.
The trip was about 4 1/2 hours. The last half was bouncy and required a lot of concentration, watching for other boats and where they're heading and are we going to have to slow down/speed up/change course. Kind of exhausting.
Once we got under the bridge another flotilla of boats zipped and zig-zagged their way around all, all brandishing their "TRUMP" flags and banners. The Trump parade just ended in Annapolis, and a fair number were racing their way to the one in Baltimore. Waking protocols be damned. (I'm sure you heard that that attitude sank several weekend Trump boaters in Austin -- nope, no one learned anything by that).
We hooked ourselves onto a mooring ball in front of the Annapolis City Docks. We'd only every been on a mooring ball once before, while on the loop. We didn't have a great experience so we've avoided it and just anchored out given the opportunity. With all the traffic on the water, we've been jostled a fair bit this afternoon. I'm hoping it calms down tonight.

Posted by Jax Robertson at 6:13 AM