Deale... which turned into Solomons 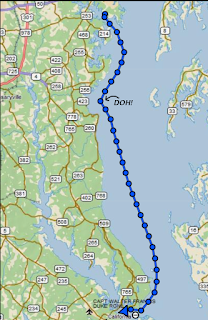 Paying attention to the weather there are a couple of fronts merging on the Chesapeake, one from the north and one from the south. Which always means bad water. We checked this morning, and today, while rainy, would be a good "go" day. The rest of the weekend, not so much. Wherever we are tonight, odds are we'll be there for 3 nights.

It was dark and dreary, but first thing, before even walking the dog, we pulled up the anchor and made our way to Deale. The trip would only be 2 hours. But because we left so early, and the decision was a last minute one, we couldn't call the marina until we were nearly there, around 9 am. We called the Herrington Marina North. Most folks rave about it. And we didn't fret over if they had space or not because there were anchorages nearby. We thought we had a plan.

However, the marina could only give is a slip for tonight, and not the next 2. Adding to that, Russ read reviews of the anchorages. None of them were positive. Comments included "small", "narrow", and "get waked a lot."

So we made a snap decision to head down to Solomons.

Sadly there really isn't much between those two. Above, lots of bays and anchoring opportunities, same below, but that stretch has nothing.

Our little 2 hour trip turned into a 5 1/2 hour trip. As we neared Deale the ride was bouncy. When we made the turn back into the bay I really worried about the decision. As time went on, however, things calmed a bit. All in all the run was fine.

Bella Gatto, who was on the east side and headed to Oxford, took a glance at the weather and came up with the same idea. They traveled across the bay and are anchored here in Solomons. We'll join them tomorrow.
Posted by Jax Robertson at 6:50 PM