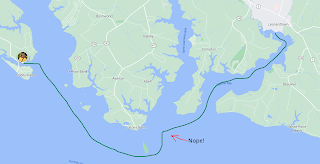 We had a very short day today and, technically, a small craft advisory was still in affect. So, we decided to stall a bit and went out to breakfast with the crew of Bella Gatto. I had sweet potato pancakes, which really reminded me of the Red Dog Diner in New Orleans. Then I recalled Hurricane Sally is on their doorstep. I wish them all well.
We eased off the docks around 9:45 am. Russ took the helm, me the lines. Our destination, Cobb Island, was only an hour away and just around the corner from Leonardtown. As Russ piloted, however, he realized our Navionics (the "google maps" of the boat world) took us between and island and the shore. We did some quick research and, while getting there looked deep enough, it looked pretty shallow on the other side. Our charts said 5 feet. We draft about 3' 6". So, yes, it was doable. BUT. The ride was short and the day lovely. We changed course and went around.

Back behind Cobb Island it's also a bit shallow. Given our fuel situation we decided to get some at a little marina here called Shymanski's. To get to the pump, however, we had to follow very strict instructions: Go to the bridge, make a U-turn to the right, come up along the pier, then hard left, and turn sideways to get to the pump. We did. 5 feet under the keel the whole way. I spent equal time watching both where I was going and our depth gauges.

It went well. Got a little gas to get us to the cheap gas (because this was NOT THAT), then followed the same quacky path out to anchor.

Posted by Jax Robertson at 5:27 PM