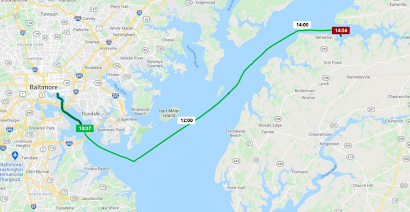 Finally, out and about on a boat! We said farewell to Baltimore (oh yes, we will be back) and started to make our way northward, just for a bit. We wanted to stop in Bohemia Bay and say hello to Foster and Susan, who are the harbor hosts there. They were incredibly friendly and helpful, taking time out of their Memorial Day holiday to drive us to Walmart and PetSmart, so we were hoping to take them to dinner. Socially distancing, of course.
The plan was to leave early today. However, a package Russ expected didn't show up Monday. Just as we were thinking we'd leave Wednesday instead, he got notice that it got delivered late in the evening. He got his package, we packed up, and were out just after 10 in the morning.

Bohemia Bay was just far enough that, given the late start, we thought would make for a longer day. And the weather was looking threatening. So we picked an anchorage that would make for and easy run tomorrow.

Russ got a new toy while in Baltimore, a range finder. One trick to anchoring is knowing (guessing, for us) how much space you have between you and the shore or other boats. Russ can stand on the deck and know exactly how far everything is. Should make anchoring very simple in future days, and we plan on doing a fair bit of it on the Potomac.

We have plans to meet up with Jonathon and Jayne of Bella Gatto, on the Bohemia Bay. They spent a couple of days in Philadelphia and are not heading southward. We're hoping to travel the Potomac together.

After 2 months of port living, it's really nice to get back on the water.
Posted by Jax Robertson at 5:42 PM