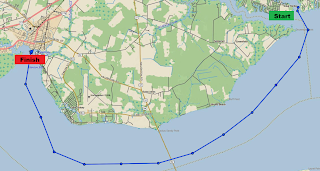 Ballots collected, we made our way deeper into the Albemarle Sound. Next stop, just 2 1/2 hours away, was Edenton. Some winds were coming on our nose which made the waves do the same, but the seas were only 1 foot or less. The trip was lovely.

Upon arrival at the little town dock we filled out our ballots and googled the local post office. Tummies rumbling a bit, we headed out to do the mail thing and get some food. As we left the dock we were approached by the driver of the tour bus, which was about to leave in 15 minutes. We took the "what would John and Martha do" option, and boarded the bus for a 1 hour drive around town.

Edenton is very historic. It's one of the few towns in North Carolina (or the south in general) that didn't get burned down by either the Revolutionary War or the Civil War. As a result, it has quite a few very old, very quaint, very beautiful homes in and around the historic district. If you get here, the tour is worth the time!

Sad news, however. Just 6 days ago we went through the Deep Creek Lock. I wrote about the lockmaster there, Robert, who's been the lockmaster for 25 years. He passed away yesterday. We're both floored -- when we saw him is was chipper and happy. He even mentioned, after seeing our AGLCA burgee, that his wife wanted to do the Great Loop, and he was trying to figure out how he could take a year off from his job. Our deepest sympathies go to his family. Deep Creek Lock will never be the same.

Posted by Jax Robertson at 3:35 PM