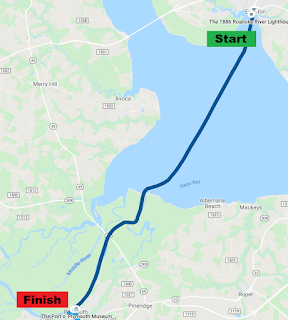 Right across the sound and up the Roanoke Rivers is the town of Plymouth. No, not that Plymouth. Plymouth, North Carolina. The trip took just a couple of hours. While the winds were a bit high, they were coming from the north and we were heading south. Once across it was almost an hour's trip up the river, which made for a very pretty ride.
As we headed for the dock the winds were still a bit strong on our stern. We passed a brand new dock wall that looked official, like tour boats would have used -- it's was in front of a park with a gazebo and bleachers. The transient docks were still up a ways. But Russ, who stood on the bow, noticed someone waving their arm, then pointing to the wall. I spun inQuest around, docked her against it, and the man who got our attention helped us with lines. We thanked him for offering the spot and chatted, thinking he was the dock master or some other town official. Nope. Just a guy who lives on a boat (which he pointed to down a ways). His name was Scott.
(Frankly, this was way easier given the conditions. The transient docks are perpendicular to the river, so between water and the wind, docking would have been a chore.)
When Russ checked in he made sure they knew our location, and that Scott said the conditions would have been tough to get parked up river. They said, "Scott would know."
Plymouth is that kind of town. Currently doing a massive revitalization, it remains a small "everyone knows everyone else" kind of place. It's claim to fame is that, in 1863 and 1864, a number of battles were fought here for possession of the town between the Confederate and Union forces. And it currently has moored a life-size replica of the CSS Albemarle, an iron-clad boat created to sink other boats.
Our only complaint is that, for whatever reason, this town (and Edenton before it) did not like outdoor seating. Covid aside, we always prefer sitting outdoors. Sadly, we took a walk around the town but ended up eating lunch and dinner on the boat.

Posted by Jax Robertson at 3:37 PM