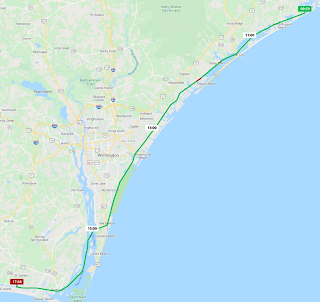 Tomorrow bad winds start so we wanted to get as south as possible. Originally it looked like the winds wouldn't be as bad in Southport, but alas, the weather changed -- gonna be bad here too.

My biggest frustration with Nebo is that if the GPS no longer shows movement it assumes you've completed your voyage. It completely ignores the existence of bridges that only open on the hour or so. The map here shows our progress after such a bridge, but we were up and on the water by 7:20 am. We got to the Onslow Beach Swing Bridge about 15 minutes before it's next opening at 10 am. Standing stations is one of my favorite things to do... NOT!

Very long day today. Not too many problems. The same bozo that waked us yesterday did so again today, in exactly the same way -- came up from behind, never hailed us, and never slowed down. We hailed the boat ahead of us and warned him. Once the bozo passed him too he hailed us and thanked us for the heads up. The boat didn't have AIS, nor had any name on the boat, nor answered our hails, making it difficult to rat them out to the Coast Guard.

Lots of boats on the water today, which was weird for a Wednesday. While the boat I mention above was the worst offender, we have a theory that all boaters in North Carolina are rude. No one slows down, no one hails you for a pass. Kinda shocking.

After Onslow, there were 2 other lower bridges, both of which we could go under with small adjustments to our antennae and radar mount. As a result we passed a number of boats that were shorter than us, but unable (or unwilling) to lower their antennae. One boat could have made it without trying -- they just really didn't know how tall they were.

Our last adventure happened as we joined the Cape Fear River on our way to Southport, which has a shipping channel. As we entered we could see a freighter coming our way. Russ checked the AIS which gave us its speed, about 12 knots. That was not something we wanted to get close to. We slowed to a crawl to let him pass us, then followed him down the river. As he headed out another vessel, without containers, was heading in. High traffic on the water today!

We arrived just after 5 pm. This marina, while lacking in amenities, is wonderfully protected. Watching the ETA we knew we'd be within minutes of them closing, so Russ called about an hour out to get a slip assignment. This time we sterned in without issue. So. HA!

Posted by Jax Robertson at 7:31 PM