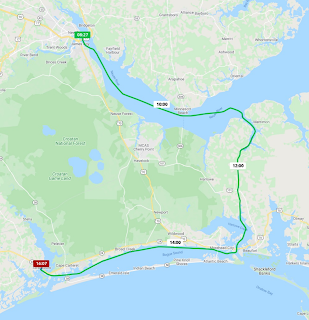 We thought Beaufort would make a good first day out being about a 5 hour trip. But after doing hard, physical labor for the last 12 days, sitting on a boat for 8 hours doesn't seem so tough anymore. Besides, a decent storm is heading this way bringing with it winds of 15 - 18 mph winds for a couple of days, so we thought we'd get as far south as we could.

Which, if you look at the map, really was only about a 25 mile trip as the crow flies. If more people boated there would have been a handy canal that connected New Bern to Swansboro. More reason to root for global warming, I guess.

Trip started out a bit sketchy as we left in a decent fog. We have radar, so we can see without using our eye, and we have a handy feature on our radio that, over our loudspeaker outside, produces a 5 second beep every 2 minutes. Handy. We kept our speeds low, though, just in case. The fog lasted for a couple of hours, building, then receding, until around 11 am.

No real incident along the way. We got waked a couple of times by "the migration", which is a bunch of fast moving boats heading south for the winter. We almost had a run in (literally) with some guy who insisted on being within feet of us passing, and once by us he had the nerve to raise his arms in a "What are you doing?" manner. I almost turned my boat around so I could tell him:

But I didn't. I'm chalking it up to very rude North Carolinian boaters.
After all the time up north this was also our first "ah, yes, current!" experience. We're docked at the town dock and wanted to stern in, which made getting on and off the boat much easier. But the currents twisted in various directions, making it a tricky thing to do. After 6 tries, I finally got her in. I wanted to give up and bow in. My husband urged us to do it right.
And we did!
Posted by Jax Robertson at 6:50 PM