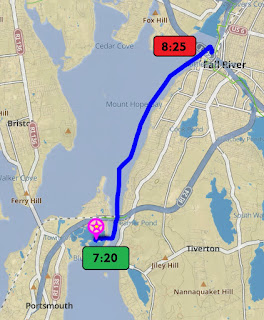 Still heading north we took another 1 hour trip from the ever-so-shallow Pirate Cove to another maritime museum, this one dedicated to battleships. The trip leaving the Pirate area was tricky. To get out you head east... into the sun. So not only was the water 5 feet beneath the keel (so you really want to stay in what channel there is), not only were we squeaking through that crazy-narrow bridge to get out, but we did it while totally blinded.

This is an RT vid of us going through the bridge
last night. Reversed, the sun was in our eyes.
Once just inside you can hear the engines rev a bit.
That was to ensure we get out quickly and with control.
Yes, we could have left later that day, but we had a small schedule deadline. Both David and Hannah worked around 10:30 in the morning, and the museum opened at 9. The plan was to get there around 8:30, drop the dinghies and run through the various ships we could see. And run we did!To get into the little bay you go right around the USS Massachusetts ("Big Mamie"), a battleship. Being that close to one definitely gives you that "whoa!" feeling.

Of the 4 ships that are here sadly 2 were closed for repairs. But that left a destroyer, the USS Joseph P Kennedy, and the submarine, The Lionfish. That was what I really wanted to see. You get to walk through the interior of the submarine from stern to bow, having to squeeze through a number of tiny doorways as you go, and marvel that there were bunks just above the missiles. Apparently the crew complement was around 30. Felt incredibly cramped, and there was only the 4 of us.

One question we could not get answered was "Why here?" Seems like an odd place to park battleships -- they didn't build them here. However, the mooring field here has space for a number of boats and close to a decent town. Definitely worth a stop if you can. There's a brewery close by, too. Always a plus.

Posted by Jax Robertson at 4:41 PM