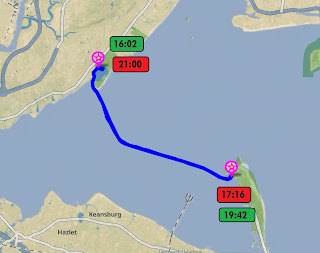 We'd just decided to leave the yacht club tomorrow (Wednesday) and make the run to Atlantic City. That meant spending a nice night on the island. I was looking forward to a nice dinner. Just as we went to take quick naps Russ got the notice that the new stove tops arrived.

(Quick side note: David of Highwind ordered a new induction stove top and asked if we wanted one too, and we definitely did. They came from the UK, and Hannah arranged for them to be delivered to a co-worker in Brooklyn. David and Hannah, however, put Highwind on a ball and left to go to Seattle for a week, so we agreed to arrange pick up when they showed up.)

Russ took transit to Brooklyn, then Uber X the stove tops and himself back. While in that process, however, the marina called. The boat that was supposed to come in Thursday was coming in early -- so guess who had to leave tonight? As soon as Russ and I got the stove tops on the boat we started engines and headed out to Sandy Hook to anchor.

We arrived around 5 pm. Since the winds were coming from the west it was a little lumpy. I made some dinner, we ate, and ... it got worse. And worse. Just as the sun and sunk below the horizon we watched as 3 to 4 footers hit us on the nose. None of the weather apps predicted the wind would be so bad, and yet.

On anchor, as the sun was setting. Not. Happy.
We left shortly after this was taken.

Right around 8 pm we gave up. Well, I gave up. We headed back to Great Kills. We followed the "bread crumbs" on our Aquamaps, and grabbed a ball for the night. That meant, we ran in the dark, found a ball in the dark, and got secured in the dark.  Moreover, with the winds so high, we were taking it on the nose up the channel, then on the beam when we turned, and it was rough. Thankfully, short.

Sometimes boating is doing scary things for the "first time", hoping it's also the last.
Posted by Jax Robertson at 1:16 PM