Cape May to Bohemia Bay, anchor 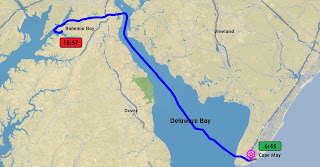 The trick to this trip is to 1) do it in nice weather and 2) try to get incoming tide. Typically we only get 1 of those to pick from but today, we got both.

Out around 6:45 am we brought up the anchor and took the slow ride up the channel in Cape May. That helped stall us a bit so we timed getting onto the Delaware Bay around 7:30, which was low tide. Winds were a bit stronger than predicted, and coming from the north west, so the first hour was a little lumpy. Nothing like the run from Sandy Hook to Great Kills, but enough we were twisting a our direction a bit, trying to get a smoother ride.

That only lasted about an hour. Once we reached the narrower part of the bay, the wind had less fetch. It also died down. The last half of the Delaware felt smoother than Jean Luc Picard's head.

Somewhere around Chesapeake City on the CnD canal the hoopla started. Boaters were out everywhere enjoying the sunny and warm Friday afternoon. We ducked and dodged jet skiers, fast racers, and sail boats all the way to Bohemia Bay. There, we took on some fuel (just enough to get us down to Top Rack in Norfolk) and then threw out the anchor.

Long but lovely day.
Posted by Jax Robertson at 7:06 PM