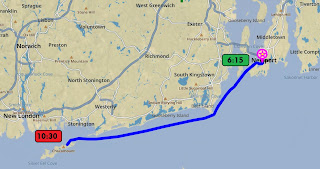 We really like Newport but the weather to too dang good not to take advantage of. So, early in the morning, we dropped our ball and headed out.

While moving toward the Atlantic we had some beam. Once we rounded the point the ride was smooth.

It became apparent that it was a holiday weekend, with many, many boaters out to enjoy their time off and good water. At one point we came across a motorized kayak that just nonchalantly made his way across the water -- right in front of us. His kayak was a dark green and he was dressed in khakis, both of which made him extremely hard to see until we were upon him. I pointed him out, and we thought, "Surely he sees us" but he made zero effort to avoid us or change course. We had to come to a full and complete stop in order to avoid him. He slowly putted his way, from our left to our right, while looking at his phone and not us. He gave a small wave without a care in the world. (Can you see my eyes roll?)

I mentioned the direction because we were on his right, and like automobile rules, that meant we had the right of way. If he were a regular kayaker, paddling his way across, then he'd have the right of way. But we both were powered, he was smaller than us, he was more maneuverable than us... whatever. Of late we've really come to dislike holiday boaters.

Dropping the hook took 2 tries, but anchoring is like that sometimes. Fishers Island has one of the top 100 gold courses in the world. We don't golf, so that means nothing to us. But if you stop by and have clubs, this may be of note.

Posted by Jax Robertson at 7:30 PM