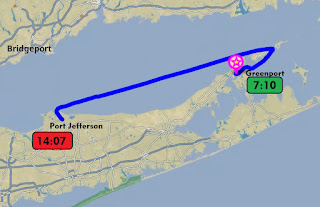 Even though we arrived in Greenport early we didn't go into town. The water was packed with boaters so we (being the curmudgeons we are) assumed the town would be too. Russ worked on various projects while I played games and wrote.

We left early in the morning, headed for Mattituck. We didn't get to stop there on the way out, and while the town isn't large, there's a train station. Weather is coming and we probably won't travel over the next few days, so I thought I'd take a train back to Greenport and see the town when it wasn't insane.

But the water was so amazing. Additionally, the Harbor Host of Long Island was generous enough to accept packages for us. He was okay with meeting us in Mattituck but Port Jeff was closer. And the water was sooooooo amazing!

So we put in a longer day and pressed onto Port Jefferson.

We were here on the way out, on anchor. It's a major ferry port, and the ferries come rocketing into the bay, so all I recall was getting waked pretty seriously. So this time we grabbed a ball, which is close to the ferry station. They ain't rocketing near us, so it's just dandy.

Also we never got into town due to weather. We explored a little this afternoon, stopping by the brewery and eating at an Indian place. In conclusion, it's a much better stop than it was the first time. It should be fun to be here for a few days.

There's a train here too but it isn't easy to get to Greenport. In fact there's a whole bunch of trains on this island -- most of which are focused on getting passengers to Penn Station. 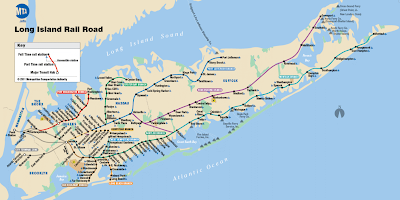 Posted by Jax Robertson at 6:07 PM