Atlantic City to Cape May, anchor 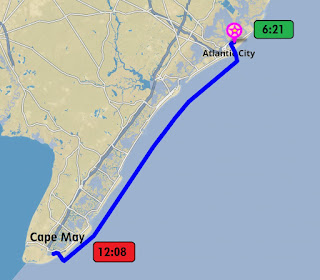 The winds shifted to the north but that would work fine with our direction today. This will be the last "must be on the Atlantic" voyage, from here to Florida -- with the exception of the occasional inlet whose shoals force you to just touch the ocean (I'm lookin' at you, St. Andrews Sound!).

We left the anchorage just before dawn. That is one of our favorite anchorages, though it's a bit dicey to get in and out of. Lots of shoals, and a narrow, narrow channel. Once you're through it, it's a great place to see the shiny Atlantic City lights.

As predicted the waves were light in the beginning and grew as he headed south, but always on our stern. The ride was smooth. Once we rounded the point around Wildwood, it got even better.

Not a long day, just over 4 hours. The biggest frustration was setting the anchor. It took us four or five tries. The mud here was really soft, so the high-powered setting we do still dragged a bit. We did it one more time, let out enough rode, then shrugged. No major weather is expected, so it should be dandy.

Big run up the Delaware is planned for tomorrow.
Posted by Jax Robertson at 4:09 PM