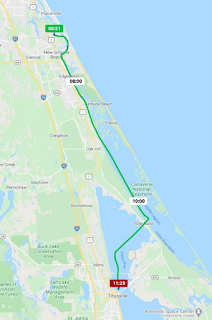 We ended up staying 2 nights on anchor in Rockhouse Creek. When we woke after the first night the winds were over 20 mph with sustained gusts in the 30s. It was howling! The anchorage was protected a bit, so it wasn't near as bouncy as it could have or should have been.

We thought about leaving anyway but decided against it for a couple of reasons. Firstly, we cross a fairly unprotected piece of the ICW, and weather would be on the beam, our least favorite way to travel.

But more importantly, from 6 am to around noon the wind and tide were moving in the same direction, north to south. There was a sailboat anchored behind us and, as far as we could tell, they were new or inexperienced. They didn't put on an all-around light during the night, and their rode had to be really short, like 3 to 1. Ours was 7 to 1 for the wind. Not only were they whipping back and forth like crazy on their line, but we were a bit close to them since our rode was longer. In conclusion, bringing up the anchor then maneuvering inQuest around the sailboat while a king tide and 30 mph winds were pushing us into her, well, that just didn't sound like fun. Add on top of that the new belts Russ installed since one of the old one broke... basically I lacked confidence.

So we waited a day, bobbing around on the creek, watching the kiteboarders in the distance enjoy the blustery day.

While the winds were still high this morning they shifted to the east so they had less impact on us. More importantly, the sailboat left. So, yay!

Not the best ride. The open waters were bumpy but not terrible. Gray skies, some rain. Nice temps, in the  lower 70s made the ride decent. Russ started calling ahead for space in marinas. We're getting the same answer up and down the coats. No room. Between the weather, the weekend, Covid, snowbirds, and the upcoming Thanksgiving holiday, space it getting to be a premium.

We were able to find a marina in Vero Beach, about 70 miles south of Titusville. That's where we'll park the boat for the holiday. But tonight, and probably tomorrow too, we'll be on the hook.
Posted by Jax Robertson at 4:23 PM