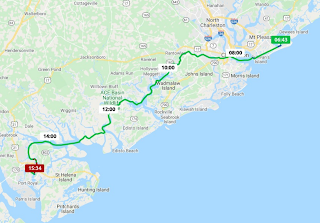 One of the nifty things about belonging to a yacht club is you get some reciprocity with other yacht clubs. This is one of those. We're at the Beaufort Yacht and Sailing Club, on their wall. Easy in and out. No power though, so we're on our own tonight. Lows shouldn't be too bad, but it will be nippy, low 50s.

Looooooong day. We were a little too late smart, I'm afraid. As we headed to the Charleston Bay I noticed, while watching the AIS signatures of other boats, a number of folks headed toward the Atlantic. It was an absolutely spectacular day. We should have taken that as a hint and did the same thing. Not that our day was bad in any way -- it was just lovely -- but we could have gone farther in a shorter amount of time. And we don't get to go outside much, given inlets can be few and trying. Much of our day was spent winding and twisting with periods of fighting a stiff current because you're moving against the tide. We think we could have made it to Hilton Head, or even all the way to Savannah.

Well, that's tomorrow's stop. Isle of Hope. We have packages waiting for us there.
Posted by Jax Robertson at 5:57 PM