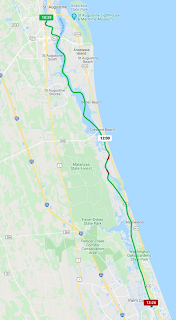 Boy, when it goes bad it can really go bad. I mean, no one got hurt, and I certainly have heard some extremely bad stories from fellow boaters that resulted in fires or sinking. And NONE of that happened to us. But...

We stayed at River's Edge Marina specifically because it is the cheapest marina in St. Augustine. And they had the cheapest fuel from this point forward. Turns out the reason the fuel is so cheap is because, well, they don't have any themselves but there's this guy you can call and he'll bring a truck of diesel to you! We'd made arrangements with the fuel truck over the weekend. First thing this morning he called and we had a plan. All we had to do was get to the "fuel dock" where he'd fill us up and we'd be on our way.

Recall the tides and currents and our little adventure getting into the slip. The sailboat we moved over for showed up Sunday, so we had a neighbor. The tide was coming in, but close to cresting, so we knew that meant we'd probably move toward the sailboat as we left.

We backed out, and immediately the wind and tide pushed us onto the sailboat. Both they and us had fenders out, so no harm would come to either of us, but it's still something we try to avoid. I worked the throttle to try to get away with no affect. I called Russ to that side to the boat to help fend off. That's when things took a terrible turn. In his rush to do that he left a line on the stern. Which slipped off. Which got wrapped around the port prop. The engine never stalled, but it wouldn't respond either. I'm trying to maneuver our boat off another boat, against the wind and current, with a single engine. We twisted so we got perpendicular to the sailboat. Our fender got stuck in his rails on his bow sprit, so we couldn't move. Our boat continued to swing, like a gate, and we hit the boat next to the sail boat, as well as laid on the pier between them. Russ and the sailor (who realized his boat was in jeopardy and ran to help us) untwisted the fender and pushed us into the fairway, but the only direction we could move was forward. Toward the restaurant.

Having walked by the place a number of times I knew the fairway widened there, so it wasn't the worst place to be. It would be easy to turn the boat around, way easier than where we were. But I had little control and fought to keep inQuest from hitting some of the other boats (there were a number of very expensive sailing cats on the piers). With a little bit of finesse (and lots of tears and frustration) I got our boat on the wall by the restaurant. But in trying to get her onto the wall I managed to take out one of their pilings. We didn't hit hard, it's just that the tide was so high that our boat was barely in the water, so a decent part of her weight was on these pilings that, frankly, were not intended to have a boat on them.

Engines off, Russ got ready to dive the prop to cut the line off. I went to find the dockmaster and show him what we did to the piling. Meanwhile the boat next to the sailboat claimed we did some damage.

While Russ was under water another man walked up and said he was sorry we had such a hard time. I assumed he was another dock worker. Turned out he was the fuel guy! He offered to fill us up right here, and we accepted. He backed his truck down the restaurant's parking lot (which at this point is largely under water) and filled us up.

After checks were written, apologies made, and the prop freed, we headed out. The tide turned by the time we left, but the wind was blowing us off the dock. Ultimately we left with little drama. Similarly, docking here was like clockwork.

So. That cheap dockage and cheap gas? Yeah. Not worth it in the long run.

Posted by Jax Robertson at 3:17 PM