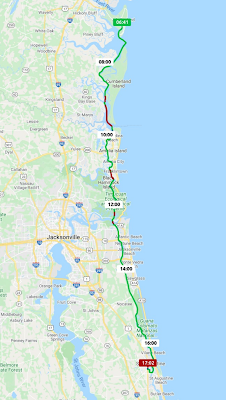 I really love St. Augustine. But I seriously hate visiting by boat. We're still in the section of the US where the tides are crazy high, making currents crazy strong. We've been here now 3 times, and each time was a bit of an event.

The tide was coming in when we arrived, which was after another 11 hour day. The sun was setting. It was after 5 pm so anyone who worked at the marina that could help was gone. And I was tired.

We were asked to park in space D18, which is a slip. The good news is it was really wide (40 feet) and we currently were the only occupants. Another boat was coming but at the moment we had it all to ourselves.

First we tried to stern in, which would have made getting on and off the boat trivial. The current was pushing us into the slip, which is never ideal. Every attempt we made to get close had us caught in some swirl that moved the boat in some bewildering direction. We gave up and decided to just bow in. We were successful, however, the current kept pushing us into the other slip. Repeatedly. So, hungry and frustrated, we docked her in the wrong location and went to get a bite to eat. Once our tummies were content we moved the boat over using lines. Even though we were very close to high tide by this time, the current was still amazingly strong. When it goes slack here, you have about 15 minutes.

Inch by inch we were able to pull inQuest into the slip we were originally assigned. (NOTE: As I type this the other boat has yet to show up. So we could have done this at slack tide this morning...) But the task got done and we're where we're supposed to be.

This morning we woke to one of our refrigerators (we have 2 small ones) not keeping temp. Water was all over the floor. In the process of combining them -- moving everything into the working one -- the ice cream, which had turned into chocolate soup, spilled in the good freezer and dripped all over the floor.

Posted by Jax Robertson at 9:58 AM