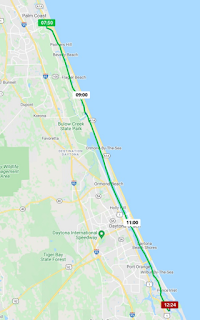 We left Palm Coast without any issues.
I am beginning to really dislike this hurricane season. While Iota is hundreds of miles away, it's screwing up our weather, just like Eta did, causing lots of windy days for the next week. You can see this with a weather app we use called Windy. While we are in the ICW the winds were coming from the north. Our ride was fine since the waves were following (boaters headed north were bouncing). But it's just the start of some bad days ahead.
We planned on anchoring tonight. The wind and current on this little inlet made anchoring the biggest challenge we'd had in a long time. We tried to anchor between 2 already anchored boats, but all of us kept swinging back and forth and in ways that we just couldn't predict, and not all in the same direction that we'd come to be able to read. We gave up and moved closer to the inlet, away from everyone, and did just fine. The wind and the current are against each other (the wind is coming in and the tide is going out) and our boat can't decide which it wants to follow.
While underway we did have another (old and familiar) issue. After pulling out of the marina we slowly got up so speed, which we normally do. But a fast boat wanted to pass. We slowed down for them and suddenly there was a lot of squealing coming from the belts of the port engine. After we got passed I kept the rpms slow and Russ investigated. Pretty quickly wafts of rubber reached my nose. But he said it was fine, just go slow until the squeal is gone. Which it did, and we drove without problems the rest of the way here.
That prompted Russ to redouble his efforts to find a serpentine kit for that engine. He made calls, talked to a number of people, but no one seems to have a kit that fits our Yanmar. One gentleman told him this shouldn't be happening and he should try to tighten the belts when they are hot hot hot!
After we anchored Russ did just that. Only to discover that we'd been on one belt today -- the other did, in fact, break.
Man, it's kinda been a bad week for us!
Okay, change of topic. Can anyone tell me what is making this noise? Turn up the volume and listen to the tapping on our hull.
Posted by Jax Robertson at 4:48 PM