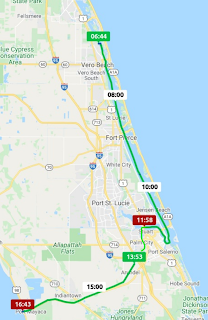 I keep saying "I'm not going to do more long days" and yet we keep doing them. We left this morning around 6:30, before the sun came up and were getting tied off after sunset.

The entire day was amazing. Blue skies, warm temps, calm winds, lots of sun -- we haven't had a day like that in a long time. As we are now somewhat seasoned boaters we know to look at the weather ahead. Come Monday and Tuesday nights we're looking at a low front coming in, dropping temps 30 degrees. Our warm 83 degree days will turn into the upper 50s. So we're trying to get somewhere to plug in and hang out with the heater on.

When I first plotted the course to Mayaka Lock (which, by the way, we have never locked through because the lake it so low typically that the doors are just open!) Navionics said it was a 9 hour ride. When we set out, however, it was much more positive, giving us an arrival time around 2:30, which would have been awesome. But we got caught by a bridge (a delay of 15 minutes) and when we reached the first lock, Lucie Lock, they were still locking someone down, so we had to wait for the turn around (about 45 minutes). Add to that it was a glorious day in south Florida on the Saturday of Thanksgiving weekend -- traffic galore in some places. But the real drag was the section of the waterway between the 2 locks. Turns out that since the lake is high there is a current running toward the Atlantic Ocean -- a formidable one at that -- which slowed us down nearly a knot. Our ETA was looking around 4:35.

The plan was to lock through Mayaka, get onto the lake, and anchor for the night. The lock closes at 5, and the last lock through at 4:30. We pushed a bit to try to get there in time. At 4:28 we rounded the last corner of the canal to we were in view. We hailed the lockmaster, asked for a lock through, and he said the door will be open when we get there. We love it when a plan comes together!

Pulling out of the lock the anchorage is just off the right. We dropped anchor. It didn't catch. We tried again, Again it didn't catch, We tried a third, a fourth, and a fifth time. The sun was now setting. We changed our plans and decided to tie up on the dolphins (a cluster of pilings bolted together so they look like the nose of a dolphin sticking out of the water) just outside the lock. They are meant for that. We tried to tie between a set, and they were too far apart for our lines. So we moved to another pair, but they were space perfectly to line up so our dingy would be what would bump if the wind changed. We gave up, tied off, and dropped the dinghy to keep it away from the pilings. By the time we were done it was nearly dark.

Tomorrow should be a shorter day. And by Monday we'll be in Fort Myers. At least that's the plan.

And, hey! DOLPHINS! (Watch the volume!)

Posted by Jax Robertson at 6:52 PM